The last two weeks marked several events that would go down in America's history, including the botched Afghanistan pullout in the hands of the Democratic leader President Joe Biden and just 10 days later, the 20th anniversary of the 9/11 attacks. This begs the question, after all the efforts the U.S. had poured into the Middle East, how much has its national security improved over the last two decades, if it had improved at all?

At least one person thinks America is no safer than it was 20 years ago. Former U.S. congresswoman Michele Bachmann appeared on this week's episode of "The Global Lane" to share her take on how national security changed over the last two decades, CBN News reported. Bachmann, who previously served as a member of the U.S. House Intelligence Committee, admitted that it is "extremely dangerous" in America today because "we are in 'red alert' status."

"If you couple together an open southern border where literally millions of people are crossing... they're all unvetted, every single one of them," Bachmann explained. "They are coming into the United States. And now you couple that together with the absolute collapse in Afghanistan - our effort for 20 years - and then you see the mass migration of refugees out of Afghanistan and surrounding areas." 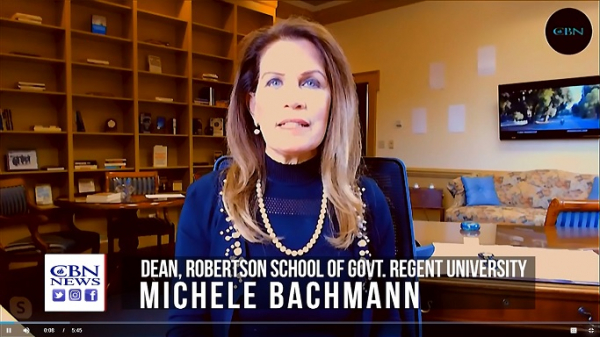 Bachmann, who is also the dean of Regent University's Robertson School of Government, posited that, "We have got a hot, very tragic set of circumstances on our case," especially when the U.S. State Department, the U.S. Department of Defense, and federal law enforcement agencies has not done enough to alleviate the crisis.

"The American people are kind of on our own as far as national security goes. We have never been in a place like this before, ever," Bachmann warned of the current situation. She underscored that the lack of extensive scrutiny and the proper vetting of refugees and migrants entering the U.S. poses a major national security threat.

In addition, the Biden administration's mishandling of the Afghanistan withdrawal also caused America's enemies to take over "almost $90 billion worth of weapons."

Bachmann said that the billions of dollars-worth of weapons that the U.S. failed to account for or bring home from the Middle East are now in the hands of the enemies, including terrorist organizations in Iran. She concluded that the U.S. had "weaponized very bad people with designs and intentions to destroy the United States of America and our ally Israel."

Moreover, Bachmann said that the U.S. Congress' Patriot Act has also restricted the Americans' rights to privacy by enabling the setup of databases "that are controlled by the federal government." She warned that Big Tech and Big Government pose a threat to the privacy of every American citizen. The next war, according to Bachmann, will be carried out without shots fired, but through cyberattacks and biological warfare.

William Patey, former U.K. Ambassador to Afghanistan and Iraq, told CNBC that while the U.S. has not seen an attack on American soil in the last 20 years, "The threat has now dispersed across the world," with attacks in Europe and the Middle East.

Patey warned, "The nature of the threat has changed - it's less concentrated and more dispersed all over the world. The radical Islamist franchise is alive and well."

Afghanistan expert and former Kabul-based journalist Ahmad Wardak agrees that the U.S. is "much weaker than it was 20 years ago, primarily because of the two wars it fought unsuccessfully." He argued that failed states like Afghanistan are "prone to terrorist organizations. That is a fear for national security."