A United States Capitol police officer testifying against former President Trump on the January 6 riots was found to be a Black Lives Matter activist.

Capitol Officer Harry Dunn testified that he was called a "racial epithet" during conversations with the January 6 "rioters," who were allegedly former President Donald Trump supporters, after telling them he voted for President Joe Biden, WND reported.

WND pointed out that the Democrats were using Dunn to build their case - that the rioters were indeed Trump supporters who allegedly followed his directives to "overthrow democracy."

"This wasn't the first time, if I can use this quote, that the 'MAGA' people came up before. There were skirmishes but never the attempt to overthrow democracy," Dunn said. 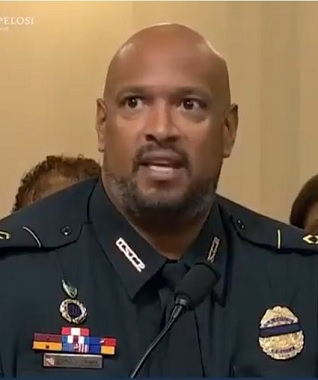 In its report, The Gateway Pundit revealed that Dunn was actually a "huge BLM activist" who "supported mass violence in Kenosha riots." The media outlet called Dunn "a huge leftist."

Dunn said in his testimony that "Trump supporters were chanting the N-word." The Gateway Pundit pointed out that Dunn can easily say things in his testimonial because he won't be asked to prove what he says. The media outlet also condemned the investigation on the January 6 riots whose prisoners are "abused."

"They do this as Jan. 6 political prisoners are abused and languish in isolation just miles from the U.S. Capitol in Washington, D.C.," The outlet said.

"Of course, this didn't happen or we would have heard about it by now. But Officer Dunn knows he can say this because the mainstream fake news media will NEVER ask him to prove it," it stressed.

WND cited a post by the Jewish Deplorable where Dunn was even pictured attending the BLM protest in Washington DC with his daughter and stating that Kenosha's burning was an "appropriate response." Dunn and his daughter shown wearing black t-shirts with the BLM print on it while holding small placards that said, "Black lives matter."

"Capitol Officer Harry Dunn and his daughter at a BLM protest in DC," the Jewish Deplorable tweeted last Wednesday.

The Jewish Deplorable, in a succeeding post, confirmed that it was Dunn as it included his photo during his testimony and Dunn's Facebook posts on February 1, 2019 when the protest the police officer was pictured in occurred.

The Hill, on the other hand, said that Dunn compared the January 6 rioters to a hitman set to kill someone because Trump fueled them to "stop the steal." He said the January 6 riot compared to nothing that happened in the past, it was "unlike anything" he has ever seen.

"If a hit man is hired and he kills somebody, the hitman goes to jail. But not only does the hitman go to jail, but the person who hired them does. It was an attack carried out on Jan. 6 and a hitman sent them. I want you to get to the bottom of that," Dunn said in his testimony.

The Hill disclosed that it was Dunn who lobbied with Congress to investigate the January 6 protest. The Hill also provided a point-by-point narrative of Dunn's account of what happened on January 6, which included statements given earlier that all he was thinking of was "survival." The Hilll also highlighted how Dunn praised the Republicans who participated in the investigation.

WND said that Dunn's testimony along with other police officers have caused several lawmakers during the investigation to tear-up as the event was recalled.